Planning of the program implementation and scaling strategy

The original DPRP had a phasing, implementing the program first in one half of Province 1, followed by replication in the other half. This scenario was updated in 2022. The Covid-19 pandemic also struck Nepal in 2020 and 2021. This led to a delay in the first phase, which will now be completed in 2024. This created time to experiment with adapted approaches and to look closely at the lessons, which could be learned in this first phase. Some components prove less effective, others are also offered by another NGO, or have meanwhile been taken over by the government. This gives the project an even sharper focus. This modified program so-called DPRP 2.0  (see lifeline) will be implemented in the second half of Province 1 in 59 municipalities with co-financing by Province and all municipalities.

Meanwhile, questions have been raised about a possible expansion of the DPRP to other provinces of Nepal. Province 1 will be a kind of showcase, on which other municipalities and provinces can graft their improvement of prevention, rehabilitation, and inclusion. Karuna Nepal does not have the ambition nor the possibilities to be involved as intensively as in Province 1. However, Karuna Nepal can share knowledge and successes with national and regional governments to include the CBR approach in national health plans and budgets.  To this end, a Training Center is being established, which when rolled out to other provinces can provide technical support in the form of training and access to information through a portal, an app, online training, helpdesk, and videos. Karuna Nepal is also in talks with UNICEF Nepal about a partnership to achieve this goal. 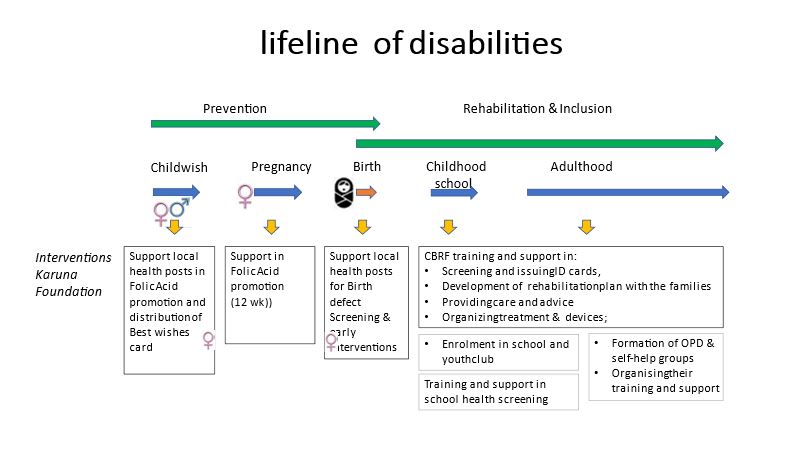